Chris Hemsworth’s ‘Ghostbusters Reboot’ and ‘Thor’ series have seen a steady increase in his fan count due to his best roles so far. But according to many he has not been able to meet the scale of attraction of a star in the new Netflix action movie ‘Extraction’.
Is it really Hemsworth’s acting mistake or is it because of the stunt directors of films like ‘Avengers: Endgame’ and ‘Captain America: Civil War’, who have directed the film.
Release date:   24 April 2020
Director:          Sam  Hargrave
Producer:         Chris Hemsworth 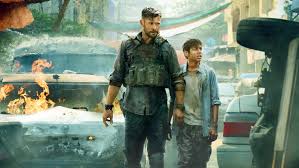 In the Story ofExtraction, ChirsHemsworth plays the role of a man named ‘Tyler Rake’ who tries to save ‘Ovi’ (RudrakshJaiswal), the son of a drug mafia (Pankaj Tripathi). Ovi is kidnapped by the drug mafia of Dhaka, whose rake is called to Dhaka, Bangladesh to free him from the clutches.
The state of Dhaka’s drug mafia also helps here. On the other end from the Indian drug mafia, ‘Saju’ (RandeepHooda) is also sent to Dhaka for Ovi’s safety. In the struggle to rescue Ovi, the story goes ahead and all the action scenes are filmed.

Like most action thrillers, Extraction does not get into the depth of the layers and characters of the plot. In the film, the characters play their part in small episodes.


However, at the level of thrill, 16 minutes shot as a single shot seems like stopping breath. When the police find Tyler and Ovi and they hide in the buildings of the city. During this time, Tyrel faces an AK-47 of a dozen policemen with his single shoot gun.
In the other sequence, jumping from buildings and fighting Tyral and Saju between traffic and the moving road. The use of sniper and assault rifle in the climax battle definitely thrills.
At the level of cinematography, pan cameras and VFX have been used in film in a better way. In films like action thrillers it becomes extremely important at this level that the gap between reality and illusion be minimized. An attempt has been made to maintain this level in the film.

Will The Mandalorian Return for Season 3? Here is every single information...

Infinite Ending: Everything you should know about the 2021...
movie

Flashback Movie Ending Explained: What about the Memories?

The Last Duel: Story of the Last Trail by Combat Confirmed Release Updates!

The Last Duel: Everything you should know about the...
movie

French Dispatch is scheduled to have its world premiere...