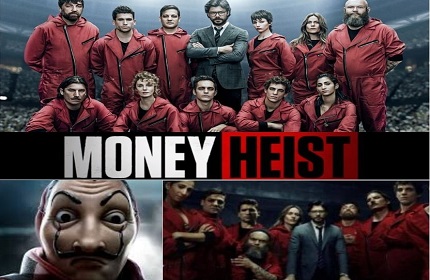 Money heist is a Spanish Crime Drama version of famous Spanish Series La Casa De Papel first released on 2 May 2017. The show has released 4 parts of the series. However initially it was to be released in 2 parts, but Netflix stretched it into a 4 part series.
The show has received a huge positive response from people all over the world. Now the fans are waiting for Money Heist Season 5 as Netflix has already renewed the show for 5th part.

Netflix Money Heist is an English version of a famous Spanish crime drama series La casa de papel. The series has released 4 parts till now.
Money Heist season 1 was released worldwide on Netflix on 20 Dec 2017. Part 1 of money heist consisted of 9 episodes.
The story of series revolves around a man called Professor in series who make a gang of 8 robbers to prepare for robbing the Royal Mint of Spain by taking some hostages. 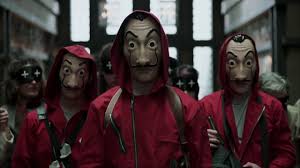 In Money heist season 1 the story is told as per the point of view of Tokyo,who’s one of the robbers. Each robber is assigned a city name as code name. The character are more famous as for their code name.
After the release of Money Heist season 1 on Netflix the show soon became one of the most viewed series on internet. People are liking the characters along with the screenplay of the whole robbery.

Money Heist Season 2 was released on Netflix on 6 April 2018.The second part consist of 6 episodes. In money heist season two the story continues from where it ends in season 1.

In season 1 they have entered in the bank and has taken hostages. The police have surrounded the bank.

In second season the story is how they escape from the bank with all the money without getting caught.
The robbers get the help of their other group member which are outside and escape successfully with the money. The 2nd season is also a hit as season 1.

Money Heist season 3 released on Netflix on 19 July 2019. The  Money heist part 3 consisted of 8 episodes. In season three the story is after 2 to 3 years from robbery.
All the members are living in different location enjoy the money they have. But the Europol traced the phone of Rio and arrest him. 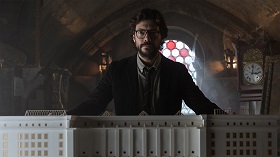 To stop Rio from being tortured the professor bring back his team and he execute berlin’splan to rob Bank of Spain. So that they can force to return Rio.

Money Heist Season 4 released on Netflix on 3 April 2020. The 4th part of series consist of 8 episodes. In 4th season the story is resumed from where it is ended in part 3.
The police get the location of the professor and Lisbon. After that Lisbon get caught by the police and is taken illegally in the camp outside the bank.

The storyline of the 4th season is on how the professor plan to free Lisbon from the camp outside Bank.
In the end Lisbon finally freed and has entered in bank and is helping the team to win.

The show has become the most watched series of the streaming service since its first release. The last season of the show ended in a cliff hanger that’s why the fans are eagerly waiting for the next part of the series.

The Netflix has not yet confirmed officially but according to many publication in Spain the show has received green signal for more parts. Till now 4 parts have been released and there is a gap of approximately 9 to 11 months in between the release of two parts.

However Netflix has not announced it officially so it may take some more time for the release.

The show has released 4 parts till now and the story line of every new part starts from the ending of the previous part. Money Heist season 4 ended with Lisbon entering the bank and is helping her team to fight the war.

So we can easily guess the story of season will be how they escape with all the gold without getting caught. However as the last part of series was not up to the mark they might add a new storyline.

As we have seen from Money Heist season 1 that the cast of the show is very consistent. There are many new characters added but they never leave any cast from previous season unless he is dead in the show.
In  Money Heist season 3 they have added some characters to help them to escape so there is a little possibility that the professor may have more characters waiting outside.

Each one of the character is loved a lot by people so they cannot take risk by dropping a character. However we are not going to see Nairobi in Money Heist  season 5.

Hope you have liked our post, if you have any suggestions comment and let us know.
Advertisement

Dan, The 1st Survivor Player to get ejected from...
Read more
Web series

How To Get Away With a Murderer Season 7...
Read more
netflix

Netflix's Queen In The South Season 5 | Everything...
Read more