The film Parasite is the first Asian film that has won the awards for Best film in Oscar 2020. The movie is nominated for total 6 awards, the movie has also won Best direction award, best international Feature film, and award for original screenplay in Oscars 2020.
Release date:  31 January 2020
Director:         Bong Joon-ho
Genre:            Comedy, Thriller

The movie Parasite directed by Bong Joon-ho is premiered in the Film festival in 2019. The movie parasite has also a broke 92 year old Oscar record, as it happens first time in history of Oscar that an international language movie has won Oscar for Best Feature Film.

According to the critics the parasite is a black comedy film. Which shows the story of a poor family, how the families face problems and how they tackle them in order tom survive. 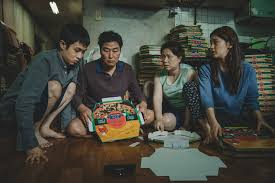 The story of the movie parasite is mainly based on the two families Kim and Park. The family is completely dependent on the other for the survival of the family members. One of the family member starts working in the rich family and he thinks that her family can live a good life if they working in park house.
So somehow he helps his family member to get the job in the house. However the story take turn in the house and the movie becomes more thrilling from their and shows how they are struggling to survive dealing with all the problems.

The South Korean movie Parasite has won the Award for Best Film along with 4 other awards in Oscar 2020.According to the experts the movie is Black Comedy film.
At first it seems like a normal family movie but as the movie moves the other aspects of the movie comes in.
The story which seems to be family drama turns into a thrilling survival game. The struggle of the family members to protect their family is worth to see.

The entire direction of the movie from start to end is brilliant. There is not a single movement in the movie where you will get bored.

The cinematography and story of the film makes viewers to stick to the movie from start to end. The movie is a must watch once in a life time.

The movie Parasite is now trending all over internet as it has already won 4 awards. It is the first Asian film to get Oscar award for best feature film.
The storyline and screen play of the movie is really very good which makes viewers to stick to the movie screen throughout the film. The actors in the movie have done a great job.

Throughout the movie you will laugh hard but also you will be thrilled about what will happen as it is black, comedy film.

The Informer Ending | Everything you should know! "The Informer"...
Read more