BIRD BOX, which is one of the most watched Films on NETFLIX is once again trending all over the social media platforms. However this time the reason is different, all the viewers must have known that in bird box there is a monster but we were never really shown the face of the Monster in BIRD BOX.

But recently the film’s team of Bird Box have shared a Picture of the actual Demon or Monster in Bird Box which was not shown in the Movie Bird Box. For those who don’t know about it read the summary of bird box to understand.

Bird Box is the most watched films in the first week of its release, it was watched by 45 Million users in the first week of its release. In the film bird box it is shown that there is an evil power or monster or devil, if anyone sees it they get an urge to commit suicide.
The breath-taking plot of the film and also the role played by character makes it one of the best horror movie even without showing the actual face of the monster. 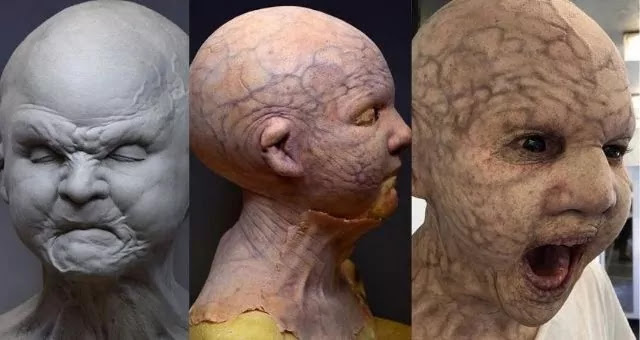 Who is the Monster in Netflix Bird Box& why it’s Face is not shown in Film?

Recently Andy Berholtz who is the designer of the creatures in movies recently revealed the real pictures of the monster or demon in the movie Bird Box through their social media handles.
He further stated that they have had a great time designing this creepy creature which in the end is deleted in the cutting room. He further stated that he liked the movie and he thinks it was best to not show the demon as everyone’s greatest fear is different.
They have not shown the face of the monster as they thought it will be deemed to show such creatures and also it seems unnecessary. That’s why they deleted that demon scenes in the movie. Later it comes up to be a good decision to not show the monster face.

The monster which are shown in the Film Bird Box was actually designed differently. A special Effects Studio later shared the image of the actual monster which is demonic baby creatures.
But it turns up to be creepy and unnecessary, that’s why they just showed us the shadows, wind speeding, or weird noises. The pictures shows the actual demonic baby creature or monster which was meant to show in Netflix Bird Box.
Share
Facebook
Twitter
Pinterest
WhatsApp
Previous articleMoney Heist Season 5 Confirmed | Release date,Revised Cast and Plot – moviespotify
Next articleHow can I get notification of BTS live Concert for FREE?

After the huge success of Alita part 1 fans from all...

Netflix's Tall Girl 2: Everything you should know! Tall Girl...
movie

The Power of the Dog Ending Explained & Short Review!

The Power of the Dog Movie: Everything you should...